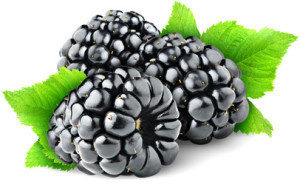 BlackBerry is a shrub of the family Rosaceae, with a height of 1-3 m. Stems erect or overhanging arcuate, angular, straight-lined or forward curved blades. The leaves are pinnate, with 3-5 leaves. The flowers are white or pink, collected paniculate at the ends of branches. The fruits of difficult shiny black drupes. Blossoms in may June, fruits in June — July. Good nectariferous. Widespread almost throughout Europe. Cultivated in America. It grows wild along river banks, moist forests.

Used Mature fruits and young leaves. The leaves are harvested during flowering, fruit – as they Mature. Fruits have sour-sweet, leaves a bitter taste. The smell is weak.

Action and application. In Russia in scientific medicine is not used.

In the Bulgarian medicine in the leaves BlackBerry additionally found

flavones, organic acids, Inositol. They are used in decoction ( 6-10 leaves 500 ml boiling water) diarrhea, gastritis and gastric bleeding. In addition, from the leaves of the medicinal tea is prepared as follows: fresh leaves placed in a closed vessel, where they remain until, until you wither and die, then steam it without water, until they turn black, then dried in air. Tea prepared thus acquires a special aroma and taste reminiscent of the aroma and taste of Chinese tea.

In Poland the fruits of BlackBerry are used for pain in the joints, inflammation of the kidneys and bladder, when coughing. Good externally as a wound healing agent.

In Germany also use the young leaves, they are found tannins, Inositol, organic acids (mainly lactic acid). Used as an infusion for diarrhea, coughs and as a gargle. It is not recommended to boil, because boiling increases the bitterness. In the past in Germany, the leaves are used in diseases of stomach, liver and bathing. (France) pointed out that BlackBerry is already in the XII century it was used as a hemostatic agent. The decoction of the leaves with the addition of fruit juice he recommends to gargle: decoction of leaves is 10% — 800 g fruit juice — 200 g. Buds, leaves and tender stems of blackberries are recommended with the addition of honey as an astringent, a tonic in diseases of the throat as a gargle. In dysentery the syrup is prepared: lump sugar in quantities larger berries in half, cook until thick syrup; take 3-4 tablespoons a day.

Many authors recommend blackberries in a mixture with other plants in diabetes: ash, field horsetail, medicinal stanica and Valerian root in equal parts. 6-8 g brew 1 liter of boiling water, and taking hot or cold. Dioscorides (I century BC) used a decoction of leaves and roots of blackberries contains tannin, against diarrhea and as a mouthwash for inflammatory diseases of the gums and ulcers (the gland).

In traditional medicine of the Caucasus unripe fruits are used as astringent, ripe fruit – as a laxative, a decoction of the leaves as a diaphoretic and as a gargle for sore throat.

In Russian folk medicine the decoction of leaves is used in chronic enteritis, tonsillitis (gargle decoction), at female illnesses with menstrual cycle in the form of douches. A decoction of the twigs to drink for nervousness, shortness of breath. The BlackBerry root used as a diuretic in dropsy (15 g dry root pour 300 g of boiling water, take a tablespoon in 2 hours). For bleeding and weak digestion it is recommended tincture of the root, to which 100 g root boiled in 500 g of water to evaporation by half. The decoction is strained and mixed with an equal quantity of red wine.

Fresh leaves applied to blisters and chronic leg ulcers. Fresh berries used for food. They, like raspberries, have a thirst-quenching property, easily tolerated not only by healthy individuals and in patients with chronic diarrhea. Cheese and dried berries are used for jam, pie fillings, syrups, liquors, soft drinks, jellies, pastes and compotes.

Leafy tops of BlackBerry collected in the initial period of flowering, we use as a binder in food poisoning, dysentery, and sometimes, according to testimony, when ulcers stomach and duodenal ulcers.